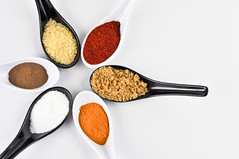 Spices. Little bottles on your kitchen shelf. But throughout human history, they have played so many roles, from defining culture and ethnicity to being a status symbol of wealth. Spices were the driving force behind modern trade, the rationale for discovering new worlds, were valuable currency, sometimes the very reason a people would settle in a certain place. Spices are darned important! And dang tasty. Which is what we really care about. Let’s talk spices.

Ever browse the spice aisle at the grocery store and notice the prices? No way am I paying upwards of six bucks for a jar of ground cloves when I only need 1/8 teaspoon for a recipe! Highway robbery! Not to mention that grocery store spices, the kind sold in the little jars, can often be really old. Old spices taste like dust. Not the flavor I’m looking for!

There are two better options when the goal is fresh spices.

Most cities or small towns are going to have one of the following: a hippie health food store co-op thingy, an Asian or Indian market, or at the very least, a Costco. I buy all my spices in bulk at the Asian or Indian market for a couple reasons: they are cheap and they get a lot of turnover, which means the spices are going to be pretty fresh. My local hippie health food store has a huge aisle of bulk spices where you can fill your own baggies to your heart’s content and I’ve shopped there for staples sometimes (they also sell bulk tea, yummm). I’ve noticed on my forages to the local bulk discounter (Costco or Sam’s Club) that they can be a good source of bulk spices from time to time, however you can bet turnover is not as high here, so they may have been sitting for a while. If none of these options is available to you, my favorite online resource is Penzey’s. They’ve got some great starter kits if you’re just beginning to use spices, and some exotic stuff (Mahlab or Sumac, anyone?) that you won’t find elsewhere.

This is not a Spices 101 class on the MOST ESSENTIAL spices for any kitchen; these are just spices and herbs I find have a lot of impact and that I find myself reaching for again and again. I am not including here some obvious things that I use in nearly every recipe I make: coarse sea salt or kosher salt and freshly ground pepper. I’m not including mixes like Garam Masala or Old Bay or including aromatics which I consider essential to any Paleo pantry: fresh garlic and onions. In my house, the hiss of onions hitting hot oil always signals the beginning of something mouthwatering and deeply flavored. It’s the sound of anticipation! So, without further ado, here are eight herbs and spices that deserve a place on your Paleo Table.

Cardamom is definitely, for me, one of those special occasion spices. I use it rarely but when I do, it’s so distinctive. If you’ve ever had Chai tea, you’ve tasted cardamom. It’s an essential spice in Indian cooking and some have called it the vanilla of Indian ice cream. Cardamom in it’s whole state is a pod with an outer shell (not much flavor there) filled with tiny seeds (which are intensely flavorful). Ground cardamom is what you likely want to use, and is commonly found in baking, where the powder provides a concentrated unique, smoky flavor. You also may have tasted cardamom in Indian meat dishes or Swedish meatballs. Yum.

My favorite use for cardamom when I’m not baking is with a sweet-ish vegetable, like carrots or a pea puree. Cardamom Carrots (minus the brown sugar, I think the carrots are sweet enough) would be a good place to start with this spice. Substitute butternut squash or sweet potatoes for the carrots and you’d be happy too.

One of my favorite reasons to use any spice is warm-you-up, clear-your-sinuses heat! Chili powder is an easy go-to spice for that. Everyone’s tasted chili powder in… well… a big pot of Chili. Paleo chefs would do well to remember the Texan saying, “If you know beans about chili, you know chili ain’t got no beans!” A big pot of Texas chili is a great way to get your meat in, and pack a ton of delicious spicy, heaty flavor. In my experience, finding grass-fed ground beef is pretty easy, and another go-to use for chili powder in my kitchen is to mix it with a little garlic powder, cumin and salt and add it to ground beef when you’re cooking it. Instant taco meat! Also known as a favorite breakfast of mine. Maybe a strange choice, but delicious nonetheless.

Ahhh, cinnamon. The smell of cinnamon is so reminiscent of a well-kept, welcoming home that many a fragrance company has tried to capture its essence in a candle or even a toilet bowl freshener. The toilet seems an odd place for cinnamon, but is nevertheless testament to the power of this spice. Besides its versatility in sweet and savory foods, cinnamon has been shown to have health benefits ranging from lowering cholesterol and blood sugar to preventing yeast infections. Nice spice! Cinnamon can be used in everything from a savory spice rub for slow-cooked meats to being a major player in Apple Crumble.

Try sprinkling cinnamon on your coffee, tea or baked sweet potato. Use a whole cinnamon stick as a straw for sipping hot cocoa. Make some apple cinnamon pancakes. Mix it with any root vegetable or winter squash along with some butter or coconut oil. With all its’ uses, you can easily see why cinnamon is a daily spice in my house!

Cumin is a pale green seed from a plant that’s actually related to parsley; it’s traditionally used in spicy Mexican dishes like chile con carne or hot tamales. It also has a ton of health benefits. You can easily find cumin seeds ground or whole, and there are good uses for both. You can add ground cumin (which is stronger than the whole seeds) to a citrus-based marinade for meat. I also love cumin in chili and spicy meat stews. An easy way to use the seeds is by toasting them in a skillet over medium heat (just add the dry seeds to the skillet, and make sure to keep an eye on them, they can burn quickly). Then add the toasted seeds to some olive oil and drizzle the mixture over roasted veggies. Cumin is great in taco seasoning. It’s easy to make your own, then just add it to ground beef or poultry while browning the meat. Serve in lettuce cups with lots of veggie fixings on the side for a super easy dinner.

Nutmeg in its whole form is a smooth little nut about the size of a peach pit. Whole nuts are preferable to ground nutmeg, since the flavor of ground nutmeg quickly turns dust-like. Whole ones will keep forever and can be grated easily with a microplane grater. I got a bag of 50 or so from my Indian grocer for about 3 bucks! Nutmeg is usually associated with sweet baked goods, but goes surprisingly well in savory applications too. Back in my mac & cheese days, it was one of my favorite things to add to the sauce. It goes great in soups with tomatoes, chicken, egg dishes, or with green veggies like spinach, broccoli or cabbage. It’s traditionally paired with lamb in Middle Eastern dishes and used in Moroccan cooking frequently. My favorite use for nutmeg is similar to how I use cinnamon: sprinkled on sweet potatoes along with a pat of grass-fed butter.

Paprika is a fine powder ground from dried “pimento” peppers (yeah, the same ones used to stuff olives). It is a beautiful red color and although it comes from peppers, is milder than chili or cayenne pepper. You can find it in sweet, smoked, and hot forms (I think smoked tastes best no matter what the spicy factor). Paprika is associated with Hungarian cuisine (paprikash and goulash), but also is used to spice chorizo sausage, and is a natural partner for other spices to create a rub for meats. It imparts a beautiful color to meat when cooked (think of Tandoori chicken). Sprinkled, it can be a fun way to garnish foods (you’ve probably seen deviled eggs topped with it).

You could make a delicious drizzle for vegetables by heating a teaspoon of paprika with a couple cloves of minced garlic and a bay leaf in some olive oil, then adding in a splash of wine vinegar. It also goes great in a vinaigrette and emulsifies well with oil and vinegar. You can just rub it on a plain chicken (inside and out) before roasting for a delicious flavor and color. Experiment with this versatile spice. I haven’t tried it with a dish yet that I didn’t like.

Rosemary is a super-fragrant herb with needle-like leaves and a fresh evergreen, almost pine-y scent. Rosemary is super easy to grow and is drought-tolerant. It’s a tough little plant and easy to have on hand year-round since it can be grown in a pot or in the ground. Rosemary is a natural partner to garlic and olive oil and that trio is wonderful on everything from roast potatoes to lamb, pork or chicken. Whenever I make a pork roast, I like to make small incisions in the meat and stuff slivers of garlic with rosemary leaves inside. It imparts a wonderful flavor to the meat. Ditto chicken, just stuff some rosemary under the skin or even place a sprig or two in the cavity of the chicken before you roast it.

Thyme, along with rosemary, is a major player in the traditional bouquet garni, a bundle of herbs used in savory soups and stews such as Beef bourguignon or Pot au Feu. Thyme is also so easy to grow, it spread over my whole herb garden, and I hardly watered it at all this summer. It’s a perennial too, so it comes back every spring. Thyme is used to season savory soups and stews, but also goes really well with eggs, tomatoes, and lamb.

I love fresh thyme in an omelet along with some salt and pepper. It’s amazing in a make-your-own marinara sauce (which I love over green beans, spaghetti squash or zucchini). If you’re longing for tomatoes in the dead of winter, plum tomatoes at the grocery store can actually taste great if you roast them along with this versatile herb. Roasting concentrates the flavor and brings life to otherwise icky, pink, out of season tomatoes. Dried thyme will work in this case (bonus: it retains its flavor much better than most other dried herbs). Sprinkle the tomatoes (sliced in half) with thyme, salt and pepper, and drizzle with olive oil. Mix well with your (clean) hands. Roast at 450 degrees for 25-30 minutes until the tomatoes are starting to caramelize. Mmmmm.

What are your favorite ways to use some of these herbs and spices? Want a primer or some ideas on any others not mentioned here? Any experiences with spices you’d like to share? Tell us in the comments! 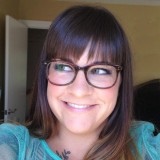