If I started at the beginning of my quest for health, I would need to say it started with a walking routine when I retired. I decided to quit yo-yo dieting and just take long walks and whatever happened would be good enough.

In 2003, I started walking a distance of 5 miles with a 55 floor incline. I’m adjacent to the Shenandoah National Park so it was a beautiful walk. But it was stressful—physically when I was carrying all the extra weight, and mentally as I would push myself to reach that 5 mile mark no matter what my mind and body were telling me.

Luckily, (yes, really), my husband had very high Triglycerides (no weight issue), and after much Dr. Google research I came upon the The Paleo Solution Podcast.

I began listening to Robb’s podcast and reading his book. I realized that insulin control was going to be the key to success. I formed a good habit by doing daily walks but I realized that getting stressful over distance or duration was not going to solve my problem by itself.

We got on the low-carb bandwagon and knocked his Triglycerides into the normal range (from 482). I just went along for the ride and we started counting carbs and went gluten-free. My weight started to magically come off in a gradual manner and I never looked back.

Later, I was interested in whether I was ever in ketosis so I got the Keto Mojo meter and started checking while going through your Keto Masterclass (perfect stuff).

I continue to do a daily walk but a new focus on good nutrition has been the game changer. The lifestyle change has finally happened and I feel comfortable with saying it is permanent because I now feel good.

My main interest is in being in ketosis enough to protect my brain from Alzheimer’s. I found that about 3/4 of the month of November I was in the .5 to 1.0 mmol range. I’m happy with the result and not obsessed with being there 100%.

I know you (Robb) talk about your mom not being around for your children and that is sad to hear. My mom died at age 55 and I have the hope that I can be around for my grandchildren for a long time. So if it’s any consolation, I thank you and the paleo community for every year that I have lived past 55.

So far I am 71 and feeling absolutely great. I keep up with my grandkids on just about everything they do, including some mountain climbing.

In 2016, I took my daughter to Paleo/fx in Austin. She arrived early so she went over to check-in before I arrived. My daughter’s first comment to me was that everyone standing in line appeared to be pretty ‘normal’. That was when I finally won her over that I was not following in the path of a bunch of lunatics.

She bought your book The Paleo Solution and we shared reading it. Her kids (my grandkids) know what it means to eat real food and I think that is what we want for all of America.

I am one of those people that never allowed anyone to take my picture when I was overweight so the original picture will go back to many years ago when I was a programmer for Lockheed Martin and was always under a lot of project related stress. So here goes with my before/after pictures (I’m sorry that no muscles are showing!!). I have felt fully in control since 2013 and have no fear of the word diet. My hope is that people will track my health to see if I’m still a survivor as the years go by.

I fully support Robb Wolf in any of his health endeavors, including sustainable farming. 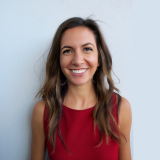