With the convenience that a toilet brings, it’s hard to argue that it’s even the least bit detrimental to our well-being.

Since most of us are (or should be) going at least once a day, it’s clear a deep squat is something that used to be performed regularly. In contrast to today, where it’s rarely (if ever) executed…

…at least in North America. Many non-Western cultures opt for the deep squat as a comfortable sitting position, and some Asian, African, Middle Eastern, and European countries still use ‘squat toilets’ in their bathroom stalls. One company has even popularized a toilet attachment called ‘The Squatty Potty’ to mimic the deep squat and create the ideal evacuation angle. And yes, there was even a study testing the amount of strain involved in squatting vs sitting from the journal Digestive Diseases and Sciences in 2003.

The squatters experienced full bowel emptying after a duration of 50 seconds on average, while the sitters reported a ‘less satisfactory experience’ that took nearly 3 times as long (130 seconds).[i]

Aside from the fact that this is making our elimination experience less than smooth (for lack of a better word); it’s making the deep squat feel like a foreign position that’s difficult to get in and painful to stay in.

Interestingly, we don’t have to look far to see it performed in North America. The question is, why does a baby sit comfortably in this position for hours, while the majority of adults fall on their backs, get stuck in the bottom, or can’t get down into it to begin with?

It’s because we don’t perform it regularly, and we’ve lost the ability. Our comfortable chairs, couches, and toilets have made it unnecessary.

A study from 2001 in the journal Clinical Biomechanics showed no difference in stress or force on the knees between squat depths of 70, 90, or 110 degrees.[iii]

The original misconception was based on research from 1960 showing an increased prevalence of ligament laxity in deep-squatting Olympic lifters compared to a control group.[iv] And unfortunately, it was enough evidence for the American Medical Association to advise against squatting below parallel.[v]

Later research was done using the same measurement techniques and showed no such difference.[vi] In fact, various studies have shown less force on the AC[vii] and PC ligaments at higher knee flexion,[viii] and the greatest shear force appears to be when the knees first bend to initiate the squat.

Some research has even found protective effect on ligaments from training with higher knee flexion, because of compression of the tissues between the tibia and femur.[ix] Priming them for tolerance to loads in a fully flexed position.

In other words, knee stability is not at risk and there is no ‘permanent stretching’ of the ligaments taking place at squatting depths below 90 degrees.[x] The only way you should be concerned with squatting deep is if you have a previous knee (ex: torn meniscus)[xi] or hip problem (ex: cam FAI).[xii] If you have healthy knees, squatting deep will only improve their health, and lead to better muscle activation (glutes and hips) and leg hypertrophy, improved functionality in everyday movement, and better athletic performance.[xiii]

Going back to our discussion from earlier, we’re supposed to feel comfortable with our knees and hips fully flexed. That’s what we did frequently and effortlessly before couches, cars, and computers.

The first step to executing the Deep Squat Hold is getting into it, which may require a bit of assistance at first. You can use anything from a door-frame to the leg of a table, and don’t feel bad about having to hang on for the entire duration. Another option is to perform it on a slightly elevated surface (hill), or step to elevate your heels until you feel comfortable flat footed. It’s okay to round the spine here, as we’re not loading it with anything; moving around and rotating a little is also encouraged.

Start with a 20-30 second sit-and-hold and look to improve on your time by 5-10 seconds each day. Once you get up to a solid 2-3 minutes without support, you can start experimenting with multiple sets, or more than 1 hold per day.

Along with quickly loosening up the hips and knees before weight-training, the Deep Squat Hold serves as a great stretch during activity breaks on days when we’re sitting or standing for long periods of time. Trying a Cat Camel (over-arching and over-rounding) maneuver while in the deep squat is highly recommended for those that have any degree of back pain or strain. 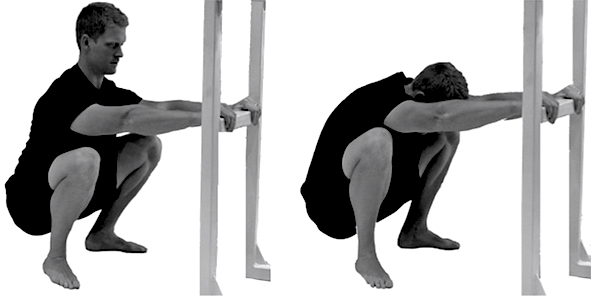 Basically, you perform a Deep Squat Hold while hanging onto something, and alternate between arching and pulling on the support to draw your shoulders back and chest up, to letting your arms extend and shoulders roll forward while rounding your spine.

This is an excerpt from 1% Fitness, where Mike shows you how to maximize your training results with a minimal commitment to exercise. The book includes free access to 14 weeks of workouts and corresponding video demonstrations on your smartphone. [i] Sikirov D. 2003. Comparison of straining during defecation in three positions: results and implications for human health. Dig Dis Sci 48(7):1201–5.

[iv] Klein K. 1961. The deep squat exercise as utilized in weight training for athletes and its effects on the ligaments of the knee. J Assoc Phys Ment Rehabil 15:6–11.

[x] Lorenzetti S, et al. 2012. Comparison of the Angles and Corresponding Moment in the Knee and Hip during Restricted and Unrestricted Squats. J Strength Cond Res.