People love to subvert the dominant paradigm. These days, “conventional wisdom” is virtually synonymous with “small-minded” and “outdated”.  Initially, CrossFit was an underground, unconventional fitness program that left even seasoned (often shirtless) athletes gasping on the ground. Then, as CrossFit, Inc. grew to the enormous company that it is today, the exercise protocol has become common, accepted, even “normal”.  Shoot, with more than 2,000 gyms worldwide, it’s certainly not “underground” anymore. The larger and more mainstream it became, the more pleasure people took in taking shots at it – some well-deserved, and some simply out of spite.

Recently, I’ve seen some of the same behaviors in the nutrition realm. At first, Paleo was novel (oh, how we forget our history) and underground… and certainly unconventional. But as it gained traction and credibility within the huge online community in and around CrossFit, naysayers have sprung up to undermine specific Paleo guidelines.  This does not surprise me.  Nutritional relativists, I call them. The win/win for these folks is that they can recommend eating whatever they think is “right for you” –  without having to risk taking a position that might be disproven by science, or overwhelmed by collective experience to the contrary.

In our postmodern, relativist world, it makes us feel all warm and fuzzy (think hearts and flowers and ponies) to say that everyone can find their own way, and that “everyone’s personal truth is equally true”, even as it applies to nutrition. Except… our bodies aren’t relativist. Or even modern. Which means that fueling a Paleolithic body using a modern ideology is a recipe for sub-optimal health. It’s a mismatch. Our genes don’t buy relativism. And what is sometimes portrayed as “healthy skepticism” is simply nutritional postmodernism in disguise. G.K. Chesterton wrote in “Orthodoxy”,

“But the new rebel is a skeptic, and will not entirely trust anything. He has no loyalty; therefore he can never be really a revolutionist. And the fact that he doubts everything really gets in his way when he wants to denounce anything.”

It’s easy to stand back and poke holes in other people’s positions if your position is to not have a position.  We (Whole9) have made a point to take firm positions in most of our nutritional recommendations… which means sometimes, we’re not the most popular folks on the internet.  However, we are not here to win a popularity contest. We share our version of the Good Food Gospel (that’s a joke, people), however un-fun or unpopular it might be, because we believe these positions lead to optimal health.  And people look to us, and others, for exactly that reason.

Dr. Cordain, founder of The Paleo Diet, did not invent the concept of “Paleo”, but he did make the information accessible to folks in his book. Robb Wolf, author of The Paleo Solution, has done an extraordinary job of sharing Paleo nutrition principles with tens of thousands of people worldwide. Experts like Dr. Cordain’s and Robb’s dietary recommendations include avoiding Neolithic foods which are at odds with our genetic heritage, and in general, make us less healthy. My Whole9 partner (Melissa Urban) and I present our Foundations of Nutrition workshops nationwide, making similar nutritional recommendations.  Our advice is founded primarily on our education and experience – though for us it’s less about history than health. We have specific beliefs, and make specific recommendations, based on the science of some very smart people, feedback from our consulting clients, experiences from those in our community and the testimonials of thousands of Whole30 participants. Nonetheless… the nutritional relativists tend to mistrust (or flat out dislike) the specific beliefs of people who aren’t afraid to take a firm position.

While we readily acknowledge that there are some minor variances between individuals, we believe that there are some concepts that are pretty much universal.  We believe that health-conscious people, in general, should avoid the following foods, even if the Weston A. Price Foundation thinks raw milk is healthy, and others argue that some cultures have survived for millenia eating grains. (By the way, simply surviving is not the same as optimizing health.)

“Pretty much universal” means that this applies to you… yes, YOU. Let’s put this in a biological context – we’re all the same species, right? And even though we have significantly different cultural histories, our genetics – that which makes us human – are common, and shared. If you had two dogs – say, a German shepherd and an English bulldog – would you think that one breed should eat a processed, grain-based diet and one should eat a raw meat diet? That doesn’t make much sense, given they’re both from the same species. All canines, like us H. sapiens, share a nearly identical set of genes, even though their (and our) wildly different phenotypes suggest otherwise. We think a dog is a dog, even though Paris Hilton’s Chihuahua would just be a (very unsatisfying) snack for a Rottweiler. What I’m getting at is that some nutritional universality within a species makes sense to us. We’re all cut from the same cloth – or at least the same type of cloth. (Sorry to steal your flowers and ponies.)

Let us clarify, though – we are not trying to tell you what to do. We’re not judging you or your behavior, or your own recommendations. If you make your living doing personalized consultations, then I can understand why you say everyone needs a different nutritional plan.  If you’re hooked on beta-casomorphins, we get why your cheese is untouchable. And if you simply disagree with our positions, feel free to choose to consume oatmeal or tempeh or raw milk or “Paleo brownies”. But if you’re reading this, it might be because you trust our extensive experience and education, and that of the science-y folks that we’ve learned from (like Robb).  If that’s the case, then our positions might not seem so arbitrary or authoritarian. And if you disagree with some (or all!) of what we write, we’re totally fine with that, too. We write to share our perspective on Good Food, and if you think we’re fascist because of it (we’ve been called worse), there’s good news for both of us: whatever you choose to eat only affects you.

Like everyone else in this world, we continue to learn as we live our lives – learn, teach and gather experience. Ultimately, what we share is simply our opinion, and is not infallible. We are far from omniscient. But don’t let nutritional relativism fool you into thinking that you should simply eat whatever “works for you”. Your genes say otherwise.

Author’s note:  Chocolate cookies and brownies are still not health food, even if you put “Paleo” in front of them. (Beware the doublespeak.) And Tucker, beer is still booze, even if it’s “Zone beer”. 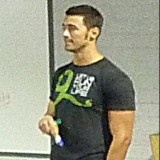