I love purple carrots. Yellow tomatoes just make my day. Orange beets, blue potatoes, bell peppers the color of dark chocolate, speckled lettuce, and purple green beans all absolutely delight me. I had read all of the foodie and greenie arguments about preserving our gardening heritage and fighting the Man at Monsanto through heirloom vegetables. But alas, I confess; it was the colors that really got me into starting my vegetables from seed and focusing on heirloom varieties. I guess I’m a sucker for novelty. I’m also a sucker for saving a buck, so I began saving seed from open-pollinated cultivars. F1 hybrids are the first generation breeding of two different cultivars, resulting in a whole new cultivar. The characteristics of the following generation, however, are an unknown. It might be more like one of its grandparents, like something else entirely or it might be sterile (a mule, for instance, is an F1 hybrid of a horse and a donkey, and cannot reproduce). F1 hybrids may be the arranged marriages of the plant world, but they are certainly not to be confused with genetically modified seed, which is more the vegetative equivalent of the Bride of Frankenstein. Hybridization is pretty old-fashioned stuff.

Hybrids tend to be very uniform from plant to plant. This uniformity is great for the larger scale farmer. Everything ripens at the same time. The tomatoes on one plant look just like the tomatoes on the next. Hybrid veggies are often bred for characteristics that help them get to market in perfect shape rather than for taste. Because of the labor, research, and development that goes into creating hybrid seeds, these seeds are also generally more expensive. Such characteristics are not very valuable to the home gardener. We prefer our tomatoes to ripen over time, so we have time to eat and preserve them. Fifty pounds of tomatoes all at once is just a pain in the ass. Also, heirlooms were generally selected for the best taste and vigorous, healthy growth in the particular region from which they come.

In my mind, however, the best reason to use open-pollinated varieties is so you can save seed. There are myriad reasons to save seed. Foremost is that seed isn’t cheap and if you save seed, you only pay for it once. Another lovely benefit is that the cultivar adapts to your garden’s conditions. If you grow several plants of one cultivar each year and continuously save seed only from the best performing plant, you will develop a strain that is resistant to the pests and disease in your area, and is adapted your soils and your climate. Then there is the important issue of self-sufficiency and food security. With your veggie growing knowledge and collection of open-pollinated seeds, you make yourself one increment less dependent on the systems in place and the agricultural powers-that-be to keep yourself alive, healthy, and thriving. It feels paranoid to think that way, but disasters happen often, wars are all around us, governments sometimes fail, and every now and then, civilizations collapse. Besides as far as survivalist actions go, saving seed makes you look less crazy than stockpiling weapons, buying gas masks, getting into ham radio, and hoarding antibiotics.

Naturally, I have some open-pollinated cultivars that are dear to me: delicious, beautiful and easy to grow in my dry Montana garden. If you are tempted to try my favorites, keep in mind that I am in Hardiness Zone 4b, and receive less than 11 inches of rain each year (and therefore have to irrigate quite a bit). If you live in Florida, I’d bet your favorites will be quite different.

Have you used heirloom plants in your garden? Tried some at the farmers market? What are your favorites? Any stories to share? Tell us in the comments. 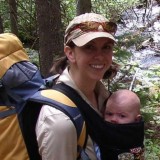 Kim Chase lives, gardens, hunts, rafts, and plays bluegrass near Helena, MT. She and her husband run a very new and very small CSA farm whenever they are not chasing their very hyper 2-year-old or being very tired hydrologists. You can follow their adventures at http://chasefarm.wordpress.com/blog.