Given that I was born in the early 1970’s (man, that was a looong time ago) I don’t know how the concept of a “Victory Garden” made it’s way into my psyche. Somewhere along the line however, whether it was talking with my grandmother, day dreaming in grade school history or watching Bugs Bunny, I became aware that in WWI-II era America (also the UK) there was a powerful government-driven push for folks to plant and maintain a garden. The US experienced some food and fuel rationing during those times, but it appears these ubiquitous, decentralized gardens accounted for a significant amount of the nutrition for many during these very difficult times.  Said another way, these Victory Gardens appear to have made a real difference and helped a lot of people.

Fast forward almost 100 years since WWI and we see the axiom of “the more things change, the more they stay the same” made all too true. We still have a need for a decentralized, ubiquitous garden infrastructure, but the reasons are different.

When Nicki and I were staying in Nicaragua a few years ago we were talking with a taxi driver who was driving us back to the airport. He’d lived in the US for about 4 years but found our pace of life too boring and headed back home for a little more risk and adventure. While he was telling us this story we drove past a motorcade of 8 coffins from people killed the previous day in a truck vs motorcycle accident (3 people on the motorcycle, 5 in the truck). Adventure indeed!

At some point in the drive I reflected on how good the meat quality was in Nicaragua. It was fresh, grass fed and had amazing flavor. Our driver nodded agreement and then drifted into some obvious internal reflection (which was dodgy considering the insane traffic conditions we were driving through). As he came out of his reverie, he said “Yea, in the US…they feed the cattle CORN, Right? How do they do that? It would be so expensive!”

Ah, great question, terrifying answer. “How” we corn feed our livestock herds is by a system of anti-market based subsidies and the use of oil that has a remarkable political and human toll associated with it. The net result is a system that is not sustainable without the inputs of limited resources such as oil, and the food that is produced is not as healthy, clean or ethical as it could be. 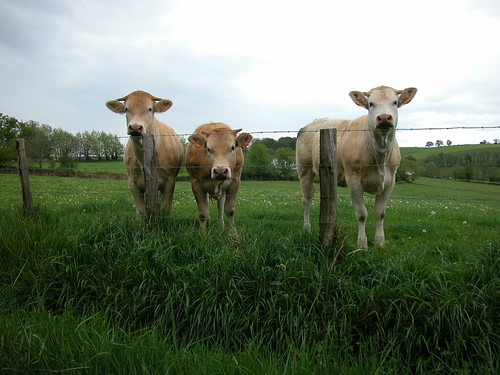 Cows Eat grass. Unless this gets me fired.

This whole topic is almost comical in how it’s treated. A recent piece that appears in the Chronicle of Higher Education (which was picked up by the Utne reader, among other outlets) tells the story of Ricardo Salvador who was passed over for a faculty position for proclaiming the heresy, “Cows eat grass.” The Dean of the School of Agriculture stated that she had “no opinion” as to the question of whether or not cows have evolved to eat grass.  If we can’t say what cows should eat is it any surprise that we get such push-back about what people should eat?

The solution starts with you. Something that seriously chaps my hind-quarters (notice I did not say fanny? I now know that means something entirely different in the UK and Australia) is when people point out a problem, offer no solutions, and just hand-wring and hen-peck. I’m not a fan of that. I like personal accountability and making actions support rhetoric. “The System” be it food, medicine or educational will not change until we force it to change, and that change will NOT happen from the top down.

What I’m putting forward as a seed of change is the idea of a Liberty Garden. I like the concept of Liberty in this case as it applies to both personal and societal freedom, that is derived from our actions and intentions. To support the Liberty Garden concept we will roll out new features to the site that will include resources on starting and maintaining gardens, finding and joining CSAs (community supported agriculture programs or farm shares), supporting and promoting farmers markets, and creating social connectivity in these endeavors. Hopefully this all dovetails into the physicians network and we are no longer beholden to “The System.” Help people to grow their own food, provide better options for those who can’t or won’t, help these folks make delicious, nutritious meals that are biodynamic and drive local economies.

Create a physicians network steeped in these concepts to help people where necessary, and create academic programs to educate the next generation of researchers to drive this message of Ancestral Health beyond the Lunatic Fringe (that’s us).

That’s the plan. There are many resources already in place and other people who see the benefit for this work. Check out the Wired Magazine piece on the urban garden.

Watch for posts in the upcoming weeks here on RobbWolf.com about how to find and join a CSA, how to find clean, humanely-raised meats, how to get your own garden going – whether you’ve got an acre in the suburbs or an urban apartment balcony, and more.

The Environment: Not just for Lefties

I had a pretty nice piece appear in the local independent news paper, the Chico News and review. The fact that my Paleo piece ended up in the “Greenways” section really got some folks riled up as you can see from this letter to the editor:

Putting an article on the “Paleo” diet [“Old is new again,” by Christine G.K. LaPado] in your Greenways section makes no sense. It is bad enough that claims are made without a shred of scientific evidence, but to associate this with “sustainability” is absurd. The environmental impact of a wholesale shift from grains and legumes to meat and fish would be catastrophic.

I have news for Patrick Newman (who wrote that letter to the editor) which is likely to bum him out: Market conservatives (Libertarians) are entering the food-fray and the goal is not Planet of the Vegans.

How can you help? We would like to roll out a really great Liberty Garden section on RobbWolf.com. Here’s what you can do to help:

Tip us off. We’d like to do a regular feature on Liberty Growers on the blog. We’ll interview local farmers, those who have sustainable growing practices, humane animal husbandry, farmers markets who are doing it right, local biodynamic and organic educators, folks like that who are of a like mind. We need your help finding these people. Do you know of a great sustainable source for fresh veggies, humane meats, clean food? Fill out this form and let us know.

Be part of the community. We’ve started a new section on the forums all about gardening and growing food. Do you have a little grower’s know how? Please go there, answer questions, post topics, show us pictures of your garden. Contribute!

Be a ContraCulturalist. Are you an experienced gardener, farmer, or animal grower who’d like to really pitch in and be a mentor for others who are just getting started? We’ve got some ideas down the road that we might want your help with. If this is you, let us know so we can call on you later down the line.

Give it away now. Grow too much food for you and your family to eat? Bummer! What on earth will you do with it? Hmm, how about give it to your neighbors, a homeless shelter or similar program. Help and change start at home. If you value this stuff, you can make it happen.

Leave a Reply to Thank you Cancel reply